Second bottle of the mixed case GR was given. 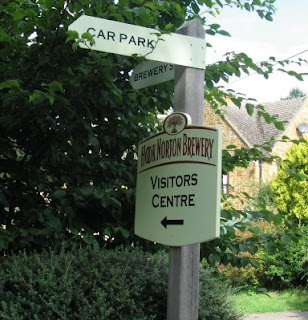 Being in the Cotswold area, we dropped by Hook Norton Brewery on the way back to London. As it was Bank Holiday Monday, there were unfortunately no brewery tours, but at least the shop and museum were open. 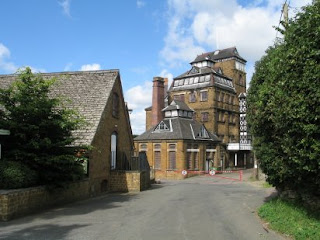 The variety pack (£10.50), different to the one on their website, contained: 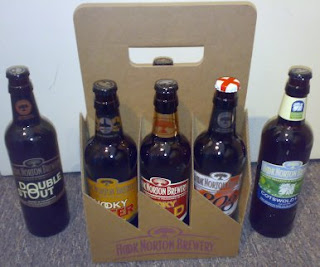 They also had two more bottled beers, which I of course also bought to have a complete "set of eight":
I have tried two of these before, and as I liked both of them, I look forward to tasting the remaining six.
Posted by Az at 23:59 No comments:

Finally catching up with PC

After having a pint of Adnams Broadside and a pint of Everards Sunchaser in The Gun (a very nice pub) with work-related people, I finally managed to catch up with PC over a few drinks at home.

Starting off with a nice bottle of Chimay Bleue and finishing off with a big bottle of Meantime London Porter, the highlight was what we had in-between; the Westvleteren Abt (12).

The only reason I bought an extra bottle last year was so I could share it with PC. He really likes Belgian beers and he is also partly responsible for my near-obsession with beers. Having waited over a year to share the bottle with him and having stored the bottle in a cupboard; I was worried it might have gone off. The aroma and taste was as nice - or nicer - than I remember it from last August. PC really enjoyed it, and he now also rates it as one of the best beers he has ever tasted. At $16 for a 330 ml bottle it is quite expensive, but I think it is definitely worth splashing out on special occasions.
Posted by Az at 23:50 2 comments:

Big bottle so good thing I had PC to share it with.

GR received a 12-bottle St Peter's mixed case after helping out an ex-colleague, and kindly gave some of them to me. First up was this one, which was slightly disappointing:

Bought by GR on holiday in Oman. He thought it was produced locally, but turns out it is actually brewed in Switzerland, which is kind of ironic after the previous beer I had which turned out to be from England, not Switzerland.

I bought this from Beers of Europe because it was listed under "Switzerland". Quite disappointing that it turns out to be brewed by Shepherd Neame here in the UK...

This beer is called "Tomintoul Nessie's Monster Mash" in the 500-book, for reasons mentioned earlier.